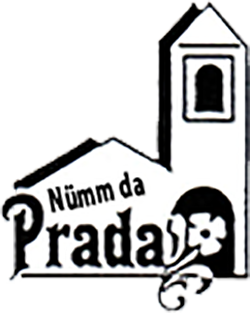 Volunteer Group founded in 1974 for the preservation and restoration of the Church of St Jerome and St Roch (San Girolamo and San Rocco) in Prada.

A gloss written in the Proceedings of the Prada Church on 5 May 1889 highlights that the Curate of Ravecchia was held to celebrate twelve Holy Masses in the Prada Church yearly: four masses during the feast days of Pentecost, St James, St Roch, and St Andrews, when there was to be a procession starting from the church of St Blaise.
The remaining eight Masses were celebrated to the Curate’ discretion during working days.
Few are the information for this period; it is unknown whether the community going to Prada remained there for the whole day and, thus, had food with them, or if everyone returned to their homes once Mass was celebrated.
In the first half of the twentieth century, the celebrated Masses decreased to two feast days: Pentecost Monday and St Roch.
The tradition of reaching Prada by Procession during St Roch’s day lasted until the fifties.
It is known for certain that, during that time and until 1973, the majority of the church community that went to Prada for the two feasts had a packed lunch; given the fact that vespers were sung in the afternoon, people remained there the whole day.

Since 1974, the situation changed radically: the late Severino Bomio-Giovanascini, patrician of Ravecchia and a person very conscious of traditions, proposes to the Parish, owner of Prada Church, to establish a Ravecchia volunteer group with the aim of finding funds for restoration works, so that the small church of St Jerome and Roch would not fall into ruin.
Thus, the group 'Nümm da Prada' (we of Prada) was born.
The Society started with the planning of the traditional lunch; for the first two years, it took place at the Mott, due to the fact that the conveyance of potable waters was still non-existent in Prada.
Through the planning of the Prada feasts and other initiatives (to cite but one: 'una pioda per Prada' – a stone slab for Prada), it was possible to collect the money for the restoration works on the sacred building and its immediate surroundings; the most important works are: substitution of the stone-slab roof; substitution of the quire screen and the ceiling; installation of a cableway for materials from Serta to Prada, and the placement of the drinking water pipes. 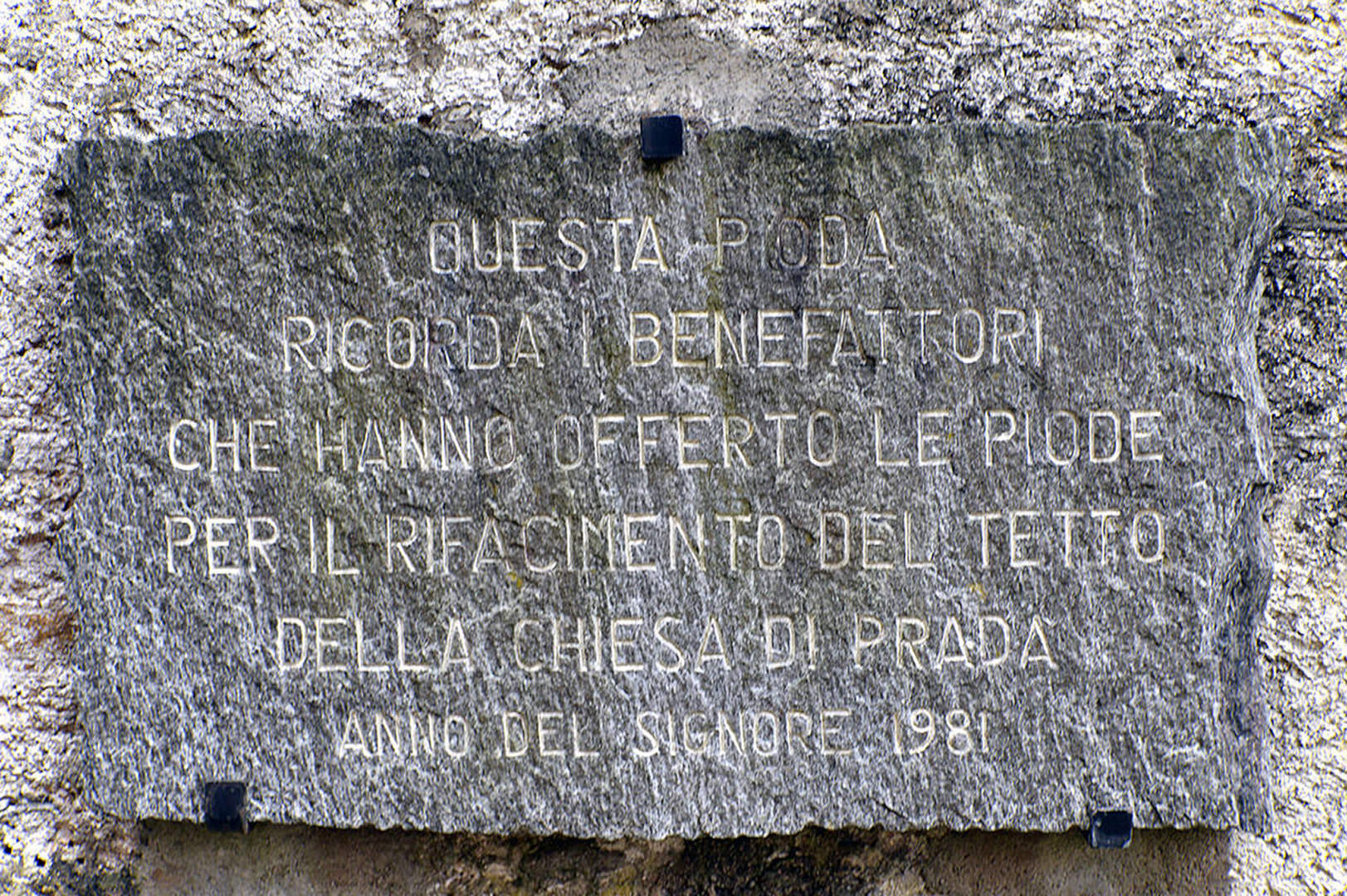 When beloved ‘Seve’ passed away in 2000, Angelo Bomio-Pacciorini was appointed president of the group.
He continued the restoration and preservation works of the church by laying the groundworks for the battle against humidity in the walls, which has always pestered the church.
Under Angelo’s administration, apart from the conservation and improvement works of the structure, among which the renovation of part of the supporting wall of the parvis and water drains, it was possible to begin with the restoration of decor and artistic works.
Some of these restorations are: the remake of the bells framework and of the wooden floors of the bell tower; the restauration of the altar; and the restoration of frescos in the choir and on the lunette of the portal.
During these restorative interventions, workers discovered and subsequently restored frescos adorning the triumphal arch that date to the late medieval period.
In 2017, the administration of the society goes to Aaron Pacciorini-Spassiggia, who continues both the battle against humidity in the walls with the help of the latest technological means and the publicizing and promotion of the historic heritage of the Prada church of St Jerome and St Roch.
In 2014, ‘Nümm da Prada’ became a society and since then collaborates in close partnership with the Prada Society; the current president of the former is a permanent member in the council of the latter.

1981
- Complete remake of the roof with stone slabs from Calanca Valley and paid in a short time thanks to the campaign ‘una pioda per Prada – a stone slab for Prada’.
- Ceiling tiles clearing and remake.
- Doors and windows substitution.
- Installation of the church electric system powered by generator.

1985
- Construction of the cable car from Serta to Prada for transfer of materials.

1986
- Restoration of the altarpiece and of the painting depicting St Francis.

2002
- Remake of the wooden surfaces inside the bell tower.

2003
- Reconstruction of a portion of parvis wall due to collapse risk.

2004
- Cutting of some firs (picea abies) that were endangering the safety of the church.

2005
- Restauration of the altarpiece and lunette stucco frames.

2006
- Altar restauration.
- Dig for a new clear water pipe due to the draining of the original water source.

2007
- Restauration of frescos in the choir.

2009
- Restoration of the fourteenth-century frescos on the triumphal arch.

2019
- Placing of a device inside the church against capillary humidity of the walls. 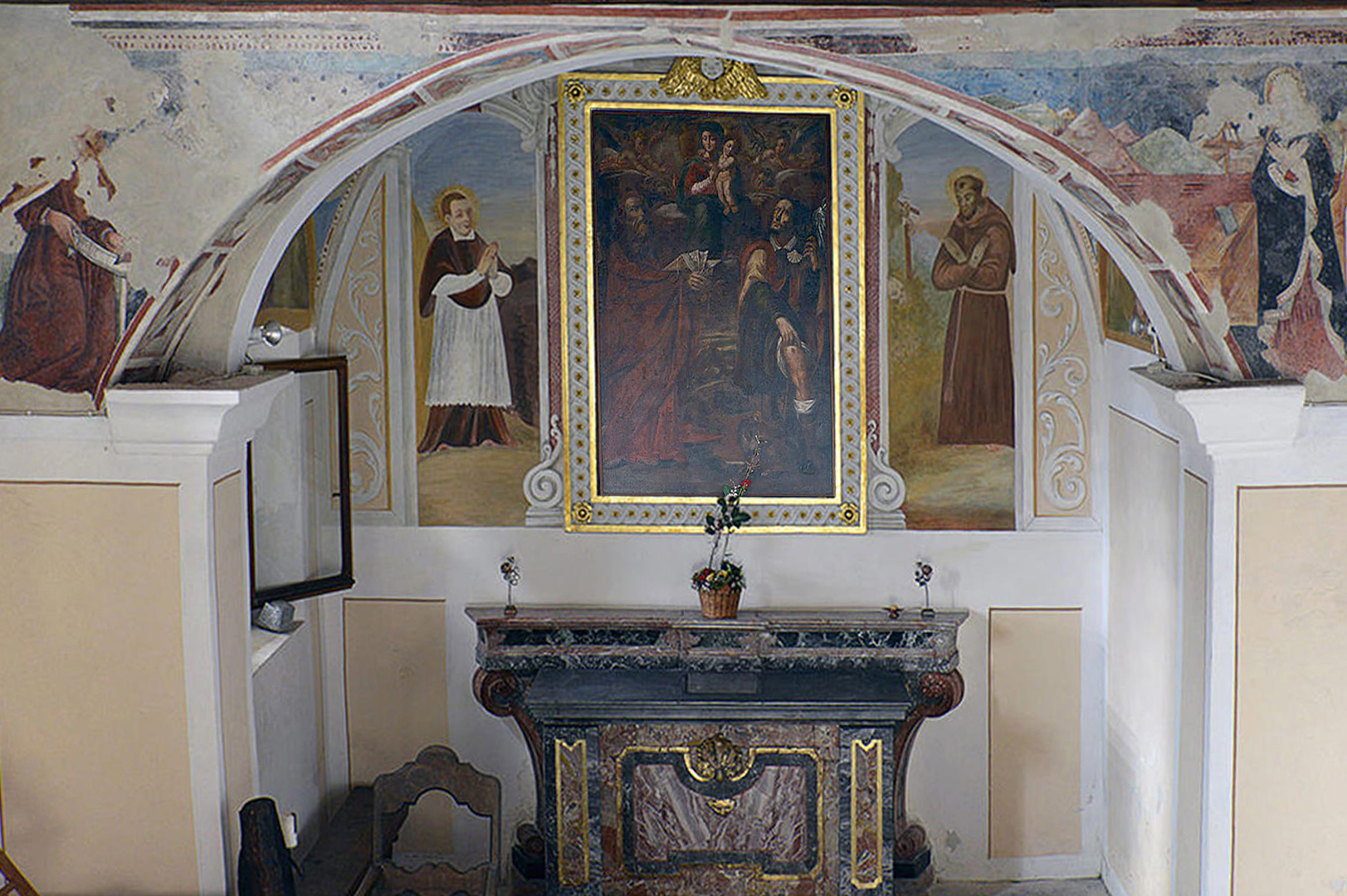 An afternoon of fun will follow with live music and lottery
(in case of adverse weather conditions,the feast is going to be either annulled or postponed). 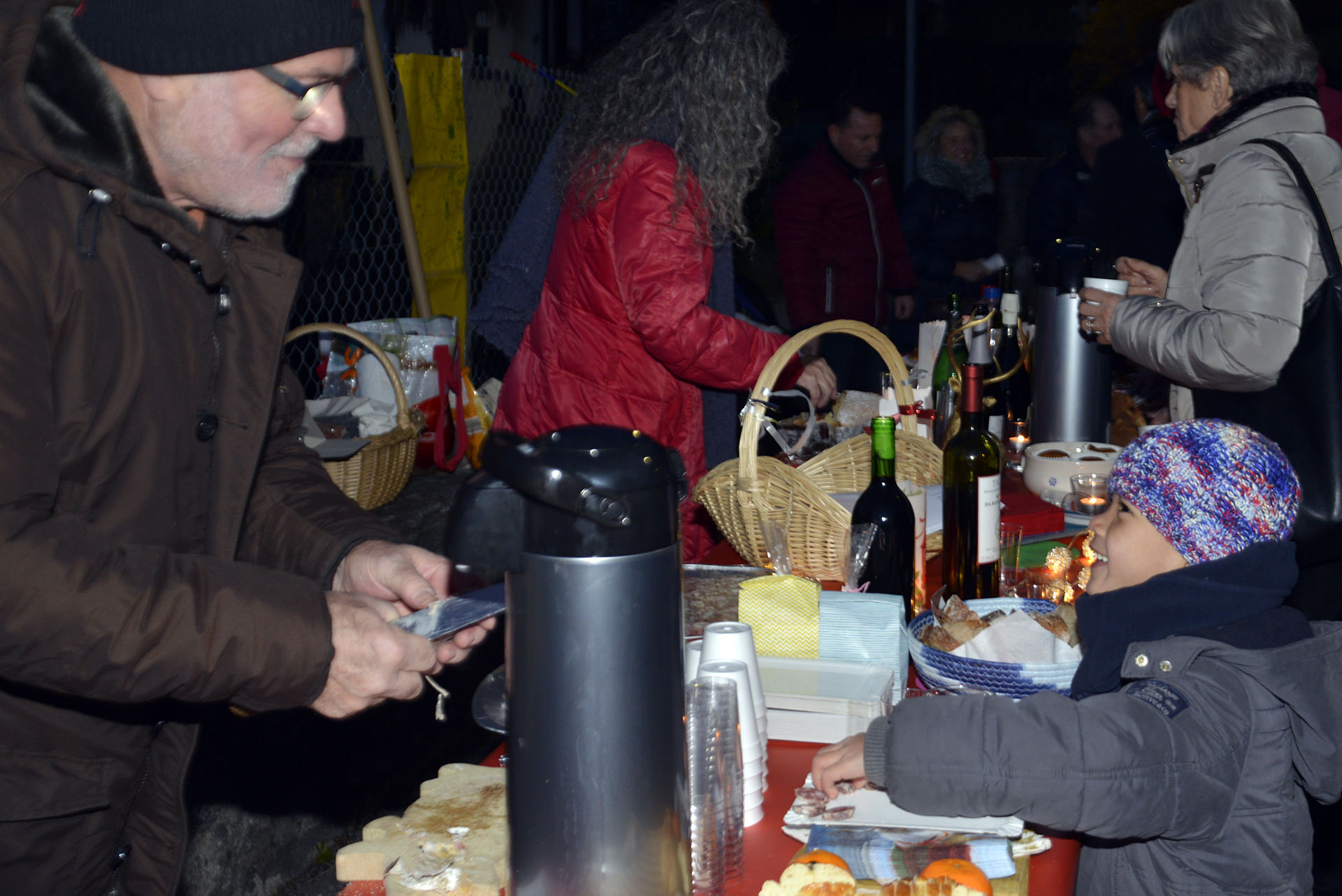